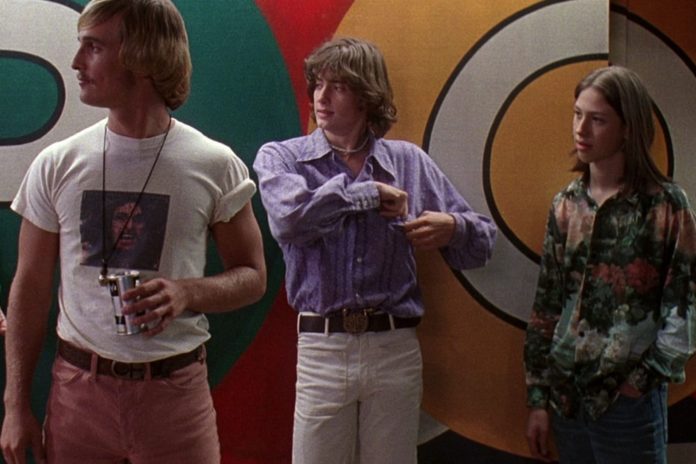 Austin has been a mecca for indie filmmakers and major studios alike for decades. A thriving artistic community, a singular aesthetic, and a vibe that’s hard to put into words sometimes have made Central Texas the perfect backdrop for dozens of famous films.

Since we’re streaming more than usual these days, and digging deep into the film canon, let’s take a moment (or a looooong weekend) to appreciate the movies that were made right here. Below are a few of our favorites starting with the Coen Brothers and ending with Drew Barrymore’s directorial debut.

You’ll see the same iconic Austin names over and over again—from Robert Rodriguez and Matthew McConaughey to Richard Linklater and Mike Judge—our city has been the inspiration for so many careers. A rich but jealous man hires a private investigator to kill his cheating wife and her new man. But, when blood is involved, nothing is simple. Directed by Joel Coen and Ethan Coen. Starring John Getz and Frances McDormand. The life of Mason, from early childhood to his arrival at college. Directed by Richard Linklater. Starring Ethan Hawke, Patricia Arquette, and Ellar Coltrane.
Rent on Prime Video. The adventures of high school and junior high students on the last day of school in May 1976. Directed by Richard Linklater. Starring Matthew McConaughey, Wiley Wiggins, Jason London, and Ben Affleck.
Rent on Prime Video. In 1980, a group of college baseball players navigate their way through the freedoms and responsibilities of unsupervised adulthood. Directed by Richard Linklater. Starring Blake Jenner and Ryan Guzman. Watch on Cinemax or rent on Prime Video. Private Joe Bauers, the definition of “average American”, is selected by the Pentagon to be the guinea pig for a top-secret hibernation program. Forgotten, he awakes five centuries in the future. He discovers a society so incredibly dumbed-down that he’s easily the most intelligent person alive. Directed by Mike Judge. Starring Luke Wilson, Maya Rudolph, and Dax Shepard. After being set up and betrayed by the man who hired him to assassinate a Texas Senator, an ex-Federale launches a brutal rampage of revenge against his former boss. Directed by Robert Rodriguez. Starring. Danny Trejo, Michele Rodriguez, and Robert De Niro.

The story of the Newton gang, the most successful bank robbers in history, owing to their good planning and minimal violence. Directed by Richard Linklater. Starring Matthew McConaughey, Ethan Hawke, and Skeet Ulrich. A day in the life of Austin, Texas as the camera roams from place to place and provides a brief look at the overeducated, the social misfits, the outcasts, and the oddballs. Directed by Richard Linklater. Starring Richard Linklater, Rudy Basquez, and Jean Caffeine. The children of secret-agent parents must save them from danger. Directed by Robert Rodriguez. Starring Antonio Banderes, Alexa PenaVega, Daryl Sabara.
Rent on Prime Video. The story of a family in Waco, Texas in 1956. The eldest son witnesses the loss of innocence and struggles with his parents’ conflicting teachings. Directed by Terrance Malick. Starring Brad Pitt and Jessica Chastain. A stubborn teenager enlists the help of a tough U.S. Marshal to track down her father’s murderer. Directed by Joel Coen and Ethan Coen. Starring Jeff Bridges and Matt Damon. A man shuffles through a dream meeting various people and discussing the meanings and purposes of the universe. Directed by Richard Linklater. Starring Ethan Hawke and Wiley Wiggins.

In Bodeen, Texas, an indie-rock-loving misfit finds a way of dealing with her small-town misery after she discovers a roller derby league in nearby Austin. Directed by Drew Barrymore. Starring Elliot Page, Drew Barrymore, and Kristen Wiig. Where To Watch The World Cup In Austin